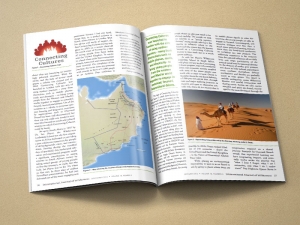 In 2005, in what was to be one of his last major acts as secretary general of the United Nations, Kofi Annan announced the creation of the United Nations Alliance of Civilizations (UNAOC). To send out a message of what the UNAOC stood for, Annan chose to deliver his address overlooking the Bosphorus Bridge in Turkey, a bridge that connected Europe to Asia, and connected cultures. Explaining why it was felt that a new UN body needed to be established, Annan argued that the world had changed. He was speaking to a group of 20 prominent world figures meeting in Istanbul to present him with the findings of more than a year of work. The high-level group included Anglican archbishop Desmond Tutu and the former Iranian president Mohammad Khatami. It was convened to produce a report examining the root causes of a growing gulf between the Muslim world and the West, and the report called for a series of cultural, educational, and youth projects to help bridge a growing gulf in understanding between the two cultures.